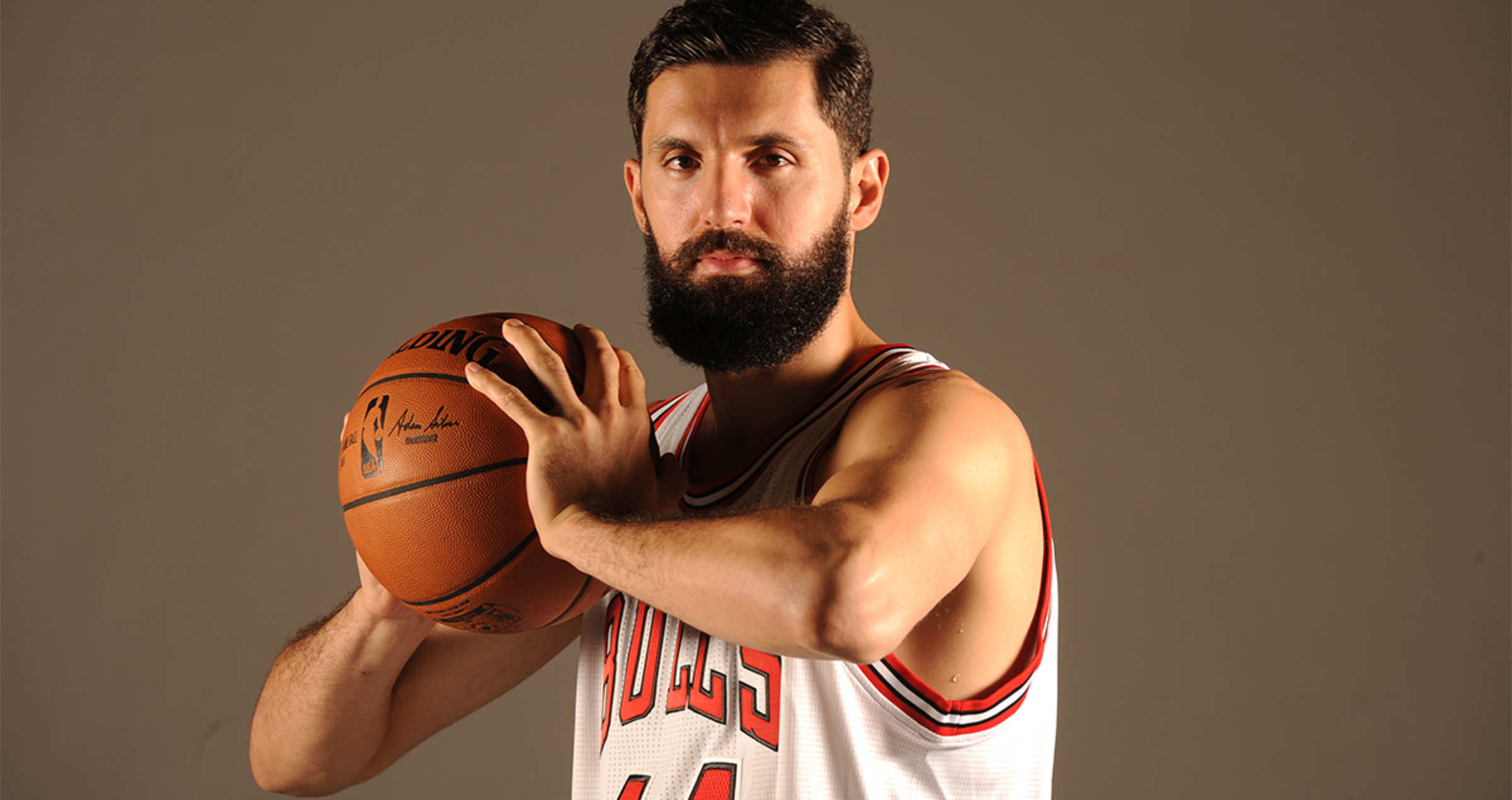 Basketball Historian Tim Gallagher joins the Bullseye to discuss the Bobby Portis-Niko Mirotic fight and the unfortunate ramifications. The Game 1 loss in Toronto is also discussed.

I’m still in a state of apocalyptic shock due to the end of the Game 2 of the Cubs-Dodgers series, so I decided to calm myself by writing about a team I actually expect to lose, my Beloved Chicago Bulls.  This season is expected by many to be an unmitigated disaster.  GarPax has designed it to go that way for a high pick in 2018.  The departure of Butler-Wade-Rondo has left the team w/ a young core of not/quasi/possibly/very talented players and Robin Lopez.

The preseason has gone far better than expected.  The Bulls were a surprising 3-3, with a fantastic win over Lebron and the Cavs.  Can this continue into the regular season?  No way in hell, so while the mood is generally good, let’s grade the players for their performance in the preseason:

Ryan Arcidiacnono, Preseason Grade: D * He’s basically a poor man’s version of Kirk Hinrich, so if you’ve ever heard any of my comments regarding the most overrated Bull of All-Time, then you know what a pile of suck I think Ryan Arcidiacono is.  25% from the field, 11.1% from 3 in the preseason is an embarrassment, and he can’t play defense.  The only benefit Ryan provides is that he’s taken a roster spot away from an elderly Kirk Hinrich.  For this, I am eternally grateful.

Antonio Blakeney, Preseason Grade: C- * 33% FG, 20% from 3.  I had a high hopes based on his summer league performance.  He’s been a massive disappointment in the preseason.  I like the kid, but he has to hit his open shots, and I have serious doubts now that he can do that consistently.

Kris Dunn, Preseason Grade: A– * In a league filled with Point Guard talent, having a defensive stopper at the PG position will be a desired piece.  Kris has everything required to be an elite defender in this league.  I love everything about Kris Dunn but his shooting, although he shot well in his 3 preseason games.   I want every available PG minute to go to him when’s back from the injury to his finger.  If he can develop an average NBA jumper, he’ll be a very strong player in this league.  If he can’t develop an average NBA jumper, he’ll be a career defensive specialist / backup PG.  It all depends on how well that jumper develops.

Cristiano Felicio, Preseason Grade: C- * Short Arms Felicio continues to frustrate me with every game I watch.  I recall the mob of Pau-haters proclaiming their ever-lasting love for Felicio in 2015, demanding that he claim the starting duties over Gasol.  In the interim, Pau developed a 3-pt shot for the Spurs (He quietly led the NBA in 3-pt percentage last year) and Felicio remains the exact same player that he was in 2015.  Felicio is athletic for a C, with little offensive talent outside of 3 ft.  He picks up fouls every 4th or 5th breath.   I’m hoping for some offensive development this year, but I expect more of the same.  His defensive prowess will always be limited by excessive fouling and arms so short he needs to bend over to zip up his fly.

Jerian Grant, Preseason Grade: C+  * Grant had a fantastic final game of the preseason, almost achieving a Triple Double vs. the Raptors.  According to my back of the napkin math, Grant also leads the league in bad jumpers that lead to easy fast break points for the opposition.  I thought Grant’s disastrous playoff series vs Boston would lead to his departure, but he’s back and starting and eager to make amends.  I’ve soured on Grant big time.  To me, his ceiling is clearly as the 3rd point guard on an average team.  His special talent is hitting teammates with passes at the knees, just enough to disrupt a shooter’s rhythm.  I’m clearly in the minority on this take, so I hope this will be the 3rd time in my life that I’ve been wrong, and I don’t remember the first 2.

Justin Holiday, Preseason Grade:  A– * Justin has been given a great opportunity here and so far, he’s grabbed the Bull by the horns.  He shot 52% from 3 during the preseason, a number clearly not sustainable, but if he can remain over 40%, he’ll be a valuable trade chip at the trade deadline, or serve as a key member on the Bulls next playoff team, which I believe can happen as early as next season.

Robin Lopez, Preseason Grade: A– * Robin is one of the most underrated players in the league, a leader by example who provides solid defense and continues to improve every year.  He is one of the only plus defenders on the roster (the other being Dunn).  He has a unique, somewhat awkward but effective offensive game.  I love the kid, and he brings real toughness (not the Bogans kind) and true grit.  I’m sure he’ll be an attractive trade piece that will be sent packing at some time this season.   I do feel his absence will be a major setback for the Bulls, since interior defense is extremely important, and he’s the only one holding it together.

Lauri Markannan, Preseason Grade: B– * I was greatly disappointed in Lauri until the 3rd quarter of the Cavs game.  Then, in a deluge of threes, fade away jumpers, and dunks, you saw all the limitless possibilities with this kid flash right before your eyes.   If Markannen can add some scowl, anger, & a general “I’m going to kick your a$$” attitude, he’s going to be a major force in this league.  But that’s a big ask.  At worst, he’ll be a great spacer, opening the floor like Ryan Anderson.  At best, he’ll be just like Dirk, drawing double teams and potentially leading the Bulls to their 7th title.  Let’s hope for him to approach the latter.  Either way, so far, I like what I see.

Niko Mirotic, Preseason Grade: D+ * The numbers (34.5% from 3) aren’t as bad as my grade.  That said, every one of Niko’s irritating faults was on display in this preseason.   If he’s not hitting early, he will almost always suck for the entire night.  It’s rare that he’ll overcome a poor start and recover with an A game.  He’s either hot, or more often than not, he’s Chicago cold.

I’ve also grown tired of the legion of Niko apologists. I’ve seen a lot of Bulls players in my day, but I’ve never seen one receive the benefit of so many fan base excuses than Niko Mirotic.   There’s always an excuse for Niko:  “Fred isn’t utilizing him correctly”, “He needs to play all the time at the 4”, “Jimmy and Rose aren’t setting him up”….I hate to break the news to you Niko Lovers, but he’s not good enough to build an offense around.  The league is roaring toward a “positionless” offensive system, where players can seamlessly play multiple positions.  Not Niko, who apparently can’t play anything but Power Forward, despite the fact that is almost always outmuscled and outweighed at the position.   He finally decided to add on 30 pounds of muscle and leg warmers, embarrassingly detailing these efforts in the offseason on Instagram.  Niko’s sucked this preseason, he’s sucked in 17 playoffs games, he has sucked for the vast majority of 2 out of 3 seasons. Is it possible he just sucks?

His poor production belies his talent.  Niko has the ability to be a good player.  I thought he had an underrated 2nd season, when he finished that year shooting 39% from 3.  That’s all I want from Niko.  He should have been able to replicate those numbers last year, but instead bricked his first 200 3-pt attempts to a 30%-ish percentage, until a hot March brought some respectability.   I hope one day the light will go on for Niko, not just for a game, but for a season.  I have no faith it will happen.

David Nwaba, Preseason Grade B+ * His athleticism is off the charts, and he’s a great addition to this team.  He shot a fantastic 55% in 6 games. I have reservations about this size.  He’s a tweener with handles not sufficient to play point, and a shot not sufficient to play shooting guard.  But his shooting can improve, and when you can jump through the roof like Nwaba, he’s worth the roster spot.

Bobby Portis, Preseason Grade D– * Bobby has taken me on a roller coaster ride.   I’ve been extremely high and extremely low on him at various points in his career.  I think he’s an awful defensive player, a real rim presenter who offers little in terms of paint protection.  In order to be effective, he should be paired with Lopez.  On the bright side, Bobby has displayed signs of fantastic offensive skills and shooting ability, notably in the 2nd half of last season.  I was on hand at the UC when Portis efficiently dismantled a solid Utah team.  He also performed well in game 1 of the victory of Boston in the playoffs.  I was eager to watch for Bobby’s progression this preseason and he disappointed me.   I do hold out hope that he’ll turn it around in the regular season.

Denzel Valentine, Preseason Grade A- * Denzel shot 50% from the field, 48% from 3 in the preseason, stellar shooting numbers for the 2nd year guard.  I know I am alone on Denzel Island.  I feel he has the ability to be a poor man’s Paul Pierce.   He has excellent court vision, passing and playmaking ability, as evidenced here in the last preseason game vs the Raptors:  https://www.youtube.com/watch?v=-2IukWI5mXo

For whatever reason, he does not have Fred Hoiberg’s love, and I’m not sure what he needs to do to get it.   Valentine was the primary facilitator during Markannen’s Q3 run against the Cavs, and in the next game, they hardly played together.  If he keeps shooting at these stellar levels, he’ll get the PT.   His ceiling is far higher than what most fans think.  I think he has the ability to win the Most Improved Player award this year w/ 15 PPG, 7 APG, 5 RPG.  But it will take Fred to give him the chance.

Paul Zipser, Preseason Grade: B- * Paul is beloved by the coaching staff and I don’t understand the infatuation.   Paul has always been a bit too slow, a bit too heavy, and bit too inconsistent to me.  He hit the 3 at a barely tolerable 33.3% rate last season and his reputation among the fan base is far better than his actual production.  He did provide an excellent Game 2 against the Celtics in the playoffs, and I would love for him to prove me wrong.   His ceiling is a 7th or 8th man off the bench, but he’ll probably be in the top 3 in total minutes for this team, thus ensuring a high draft pick in 2018.

Coach Fred Hoiberg, Preseason Grade: C- * The ball was moving much better on the offensive end in the preseason.  However, I find his minutes limitations on Valentine maddening.  Fred also needs to stick up for this team when we get the raw end of the whistle.  I noticed one play in particular in the preseason, when a horrendous call on Valentine sent him to the bench.  Not a word of protest was offered by Fred.  Players notice that, and they want to know that their coach is fighting for them.  Fred should lead the league in technicals by a large margin, because his team has no one who get the benefit of the doubt from the officials.  Of course, he’ll probably finish in the bottom 5 for total technicals….just another case of Fred being too nice.

Listen to the Chicago Bullseye Podcast